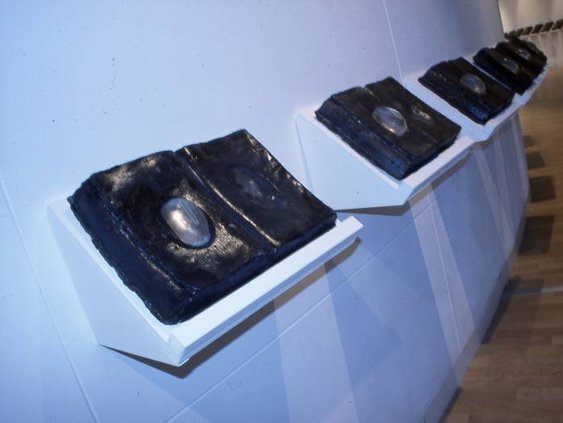 Lache pas la pataté is developed out of an old Cajun saying, which translated reads ‘don’t let go of the potato’ meaning hang on in there. It seems poignant that something as humble, basic, and unpretentious as the potato, should be cited as a metaphor for an essential, a basic necessity, a fundamental, as something to hang onto.

75 one-line phrases were collected into the Gallery from residents of Rugby and encapsulated inside a clear resin potato form. The resulting resin potatoes were located within a cast sculptural open book form. The composite imagery of the two forms, suggested the notion of an essence, a crux, a fundamental, embodied through the glistening, refracting potato form. Its location within the heavy book form simultaneously evoked the concept of concealment and revelation.