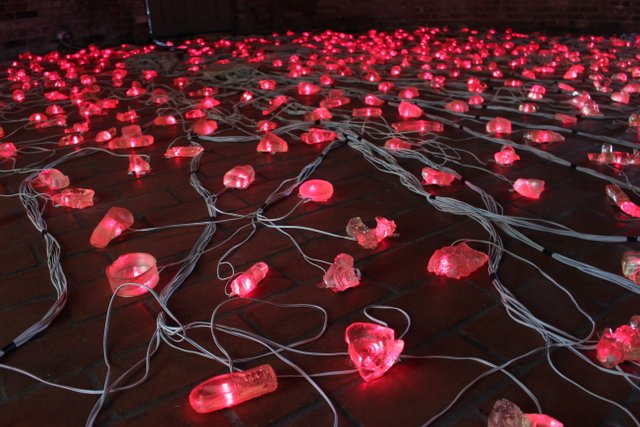 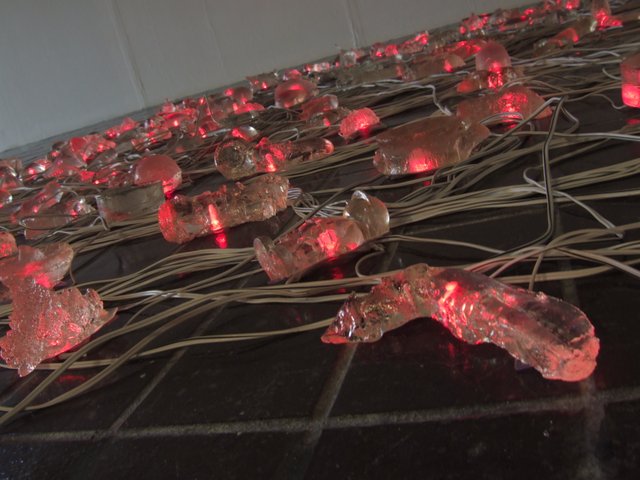 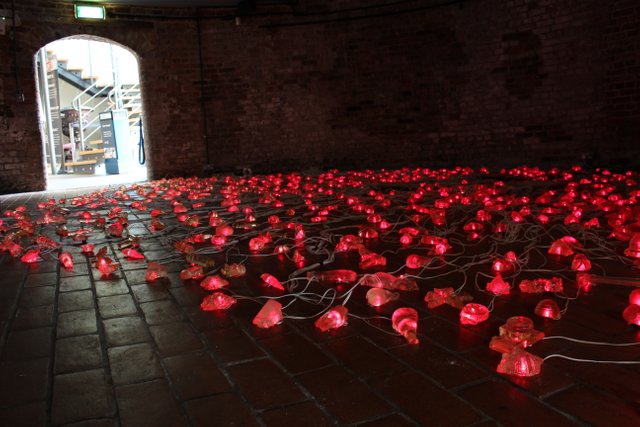 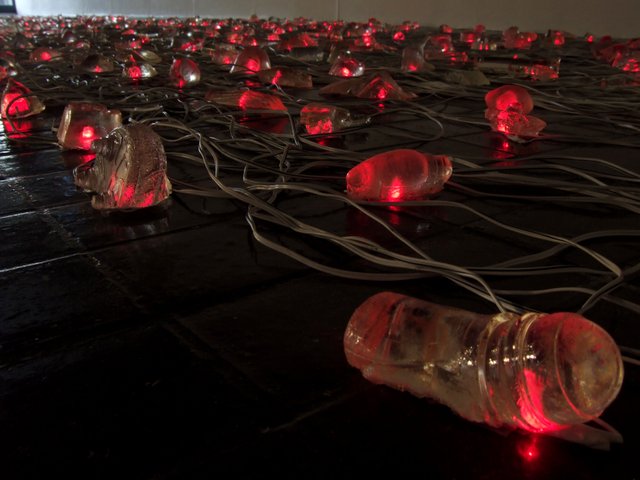 ‘risk @ssessment V’ is the latest incarnation of an ongoing art project by Tom Hackett. Installed at Sharp'e Pottery Museum. On entering the space, the viewer encounters a floor based field of 600 sparkling cast resin objects. These include a part of a football boot, a camera, a lobster claw, a deodorant, a Yale lock, a paracetamol blister-pack, a torch, and a found dead bird, amongst many other forms. Each object contains a red flashing LED, which makes it glow and pulse. Each item can be associated with any number of identified risks or pleasures. As the objects blink on and off they become a twinkling array evocative of a cityscape as viewed from a descending airplane.

Previously it has been installed at MAC, Birmingham, Firstsite, Colchester, RED Gallery, Hull and Millais Gallery, Southampton. Each time it morphs to the qualities and attributes of the space. At Sharpe’s Mueum it takes on the iconic conical brick Kiln. A space which dedicated it’s industrial working life to creating functional ceramics including sewer pipes for the Houses of Parliament. Projected onto the kiln wall is a new video work by Tom Hackett entitled ‘addendum’. comprising multiple images of textures, objects and natural forms gathered in Swadlincote and Moira, shot through a red lens filter, to create a dislocating sense of time and place. Set in a short repetitive rhythm, the existing ambient sounds have grown into a meditative sound composition. by collaborating artist Julian Woodcock.

Originally risk @ssessment was conceived as playful reaction against blame culture. Today it can be also be seen as a celebration and joy found in the ordinary. Intermingling with the artefacts and imagery of Sharpe’s Museum and Swadlincote, the project presents as a contemporary archaeology of everyday life. In essence putting a lens on the things all around us, where beauty can be found in anything and any place if we look hard enough. The project can also be seen to reflect environmental concerns in a world increasingly full of stuff, a problem which is staring most artists in the face, along with the rest of us. A problem we all need to react to going forward